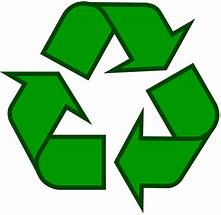 Last night during the regular Monday City Council meeting, the Council approved a 9% rate increase for North Lincoln Sanitary Service for curb side trash/recycling collection.  Many factors caused the rate increase including the increased cost of recycling.

In the early 1970s America began a trash reduction campaign symbolized by a triangle.  Each point represented a way to reduce trash – reduce, reuse and recycling.

Over the years it seems greater and greater emphasis has been placed on recycling while diminishing the importance of reducing and reusing.  I began my first city recycling program around 1991 in Centreville, Maryland.  It began with a trailer separated into compartments that we pulled behind a truck and loaded with recyclables left by our businesses in green bins.  Everything was recyclable at that time – glass, all plastics, paper, cardboard, etc.

Over the years the number of items we can recycle has decreased.  The cost to recycle has also increased.  Up until September of 2017 North Lincoln Sanitary was paid by recycling processing centers when they dropped of the recyclable loads.  This helped keep the cost to you down.  They now pay the processing centers to drop off recyclables. In April of 2018 North Lincoln Sanitary paid $191.70 per ton for mixed recyclables; in May the cost increased to $203.70 per ton; and, the cost is expected to increase to $215.70 per ton in June. This is not an issue our community is facing alone, it’s a global crisis that hit the recycling industry hard and is impacting all councils and businesses worldwide.

In a recent City Council meeting I emphasized that it’s time to emphasize reducing and reusing our solid waste.  Over the weekend I asked my wife Elizabeth if we could reduce both the amount of trash and the amount of recyclables we generate in a month.  Our answer was “we don’t know but we’re going to give it our best.”  I invite you to join us in this journey.

I will be sharing my personal trash reducing experiences and I ask that you email your own personal experiences and encounters with reducing your trash production and ask you to help me by sending your ideas to the email listed on this page.  Remember, the less trash we produce means less tonnage dropped off and the landfill and recycling centers.  With the Volatility of the recycling market it is now imperative that we take on individual responsibility to reduce our trash production.